Scientific software developer
👋 🥉 🥈 🥇 🗃️ 🗨️ 🐕
I write software to automate neuroscience research and data analysis in my lab, and side hustle trading on the stock market. I love writing fiction, making art, playing board games, and loving on Abby and her two cat sisters!
Sterling, VA
Posts 3 Comments 13 Spaces 26
Share
This post is public.
Copy link

My dog Abby was all about the buttons when we first got them. She learned "Play" and "Outside" very quickly and used them appropriately and enthusiastically. We later added "All done" and after a couple weeks she started using it appropriately as well. A few weeks later we added "mommy" and "daddy." With these five buttons, she made quick progress, used them a lot, and began putting them together. ("Outside daddy" to go on a walk, "play outside" as opposed to playing inside, etc).

Then the buttons went out of stock and so we had to wait a couple months before we finally got some more buttons and hexes. When we got them, we first added a couple new hexes and rearranged the buttons she had. This was so we could organize them by part of speech as is suggested. Before, we only had two hexes so we had these words all smushed together. A few days after re-arranging the buttons, she seemed to still be using them appropriately, so we added two more buttons - "walk" and "daycare."

We chose these because she used outside in so many different combinations to mean different things. We were pretty sure she was using "outside daddy" for walk and "outside mommy" for daycare, so we thought we'd give her words for those. She pressed daycare once in an impressive 3 word combination of "Daycare, play, daddy." It was particularly interesting because, even though I am usually the one that takes her to daycare, in the month leading up to this, her daddy had been exclusively taking her to daycare because he had some extended time off from his work. However, this was at a time that we could not take her to daycare, so we had to say no. I'm afraid this has discouraged her, because she has not used the daycare button since. She also has never used the "walk" button. She can tell from our body language when we are about to go on a walk, and she gets so excited that she has no interest in the buttons, she just wants to go go go.

Anyway, my issue is that the frequency with which she uses any of the buttons has dropped dramatically since we added the new ones. She has reverted to going to the back door and whining to be let out instead of using the outside button. She has stopped using "play" as often and gone back to just bringing us a toy. Has anyone else had learners just stop using the buttons they know really well when they introduced new buttons?

My husband has been trying to convince her to use the buttons again - ie, when they're going to go on a walk, he calls her over to the button board and tries to get her to paw the "walk" button and won't go until she does. She has learned the phrase "Use your words" but as often as not, when we ask her to use her words, she just smacks the board, sometimes not even hitting a button. I'm afraid asking her to press them might be frustrating to her and make her want to push them less, so we've stopped doing this and just continued modeling with the buttons.

Anyway, I'm looking for advice. When she uses body language to ask for something, like to go outside or play, should I ignore her until she asks with the buttons? I'm afraid she has decided she doesn't need the buttons because she is already so good at communicating what she wants without them, and I don't want to reinforce that, but I also don't want to frustrate her by ignoring her.

I also wondered if the solution might be to give her a new word for something she can't ask for using body language. If I can think of something she might want to say that she' CAN'T say without buttons, maybe it would motivate her to use them once she figures out the new word. Any suggestions? Thanks in advance!
0
Like Comment
12 comments 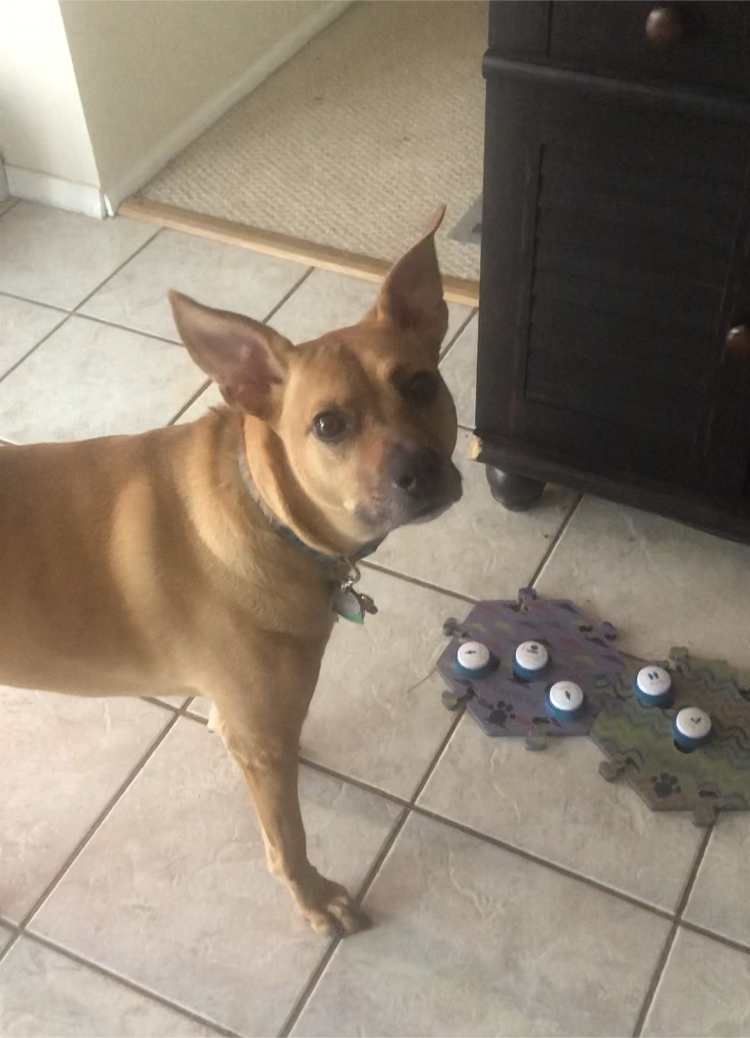 “Daddy outside” to mean walk and first use of “all done”

She pushed “daddy” and “outside” separately several times this morning. Daddy is at work all day so I kept telling her “daddy bye” and “daddy be back later.” And of course letting her outside when she pushed outside. But she seemed unsatisfied with these responses and kept going back to the board. Finally she pressed daddy and outside together, and understanding struck. She was asking to go for a walk! She only has five buttons (outside, play, all done, mommy, daddy) so she is limited in what she can express but I think “daddy outside” was her way of trying to say walk. I think this because my husband is the one that walks her. I go outside with her to play fetch or take her to daycare but if my husband goes outside with Abby, it is ALWAYS because they’re going on a walk. He never goes out with her otherwise. I think she was trying to say “I want the kind of outside I get with daddy!”

The second interesting thing she said today was how she used the “all done” button. I’ve been modeling the button and she seems to know what it means but she has never pressed it. This afternoon we went to play fetch outside. When we came in I modeled “play outside all done” and then immediately when to go put away some folded laundry. I didn’t really give her time to respond (I didn’t expect a response). Anyway she followed me and sat there watching me put away laundry. When I finished, I came back out into the living room and was standing there looking around, kind of trying to decide what to do next and Abby went over to the board and pushed “all done.”

I was so thrilled because the context was appropriate, but I’m not sure what exactly she meant. Was she confirming that we were all done playing, and she just waited til I was listening to push the button? Or did she see that I was all done with my own task (putting away laundry) and narrate that for me? I have never modeled “all done” for an activity that doesn’t involve her. Either way I was very excited!!! I’m so proud of my pup! 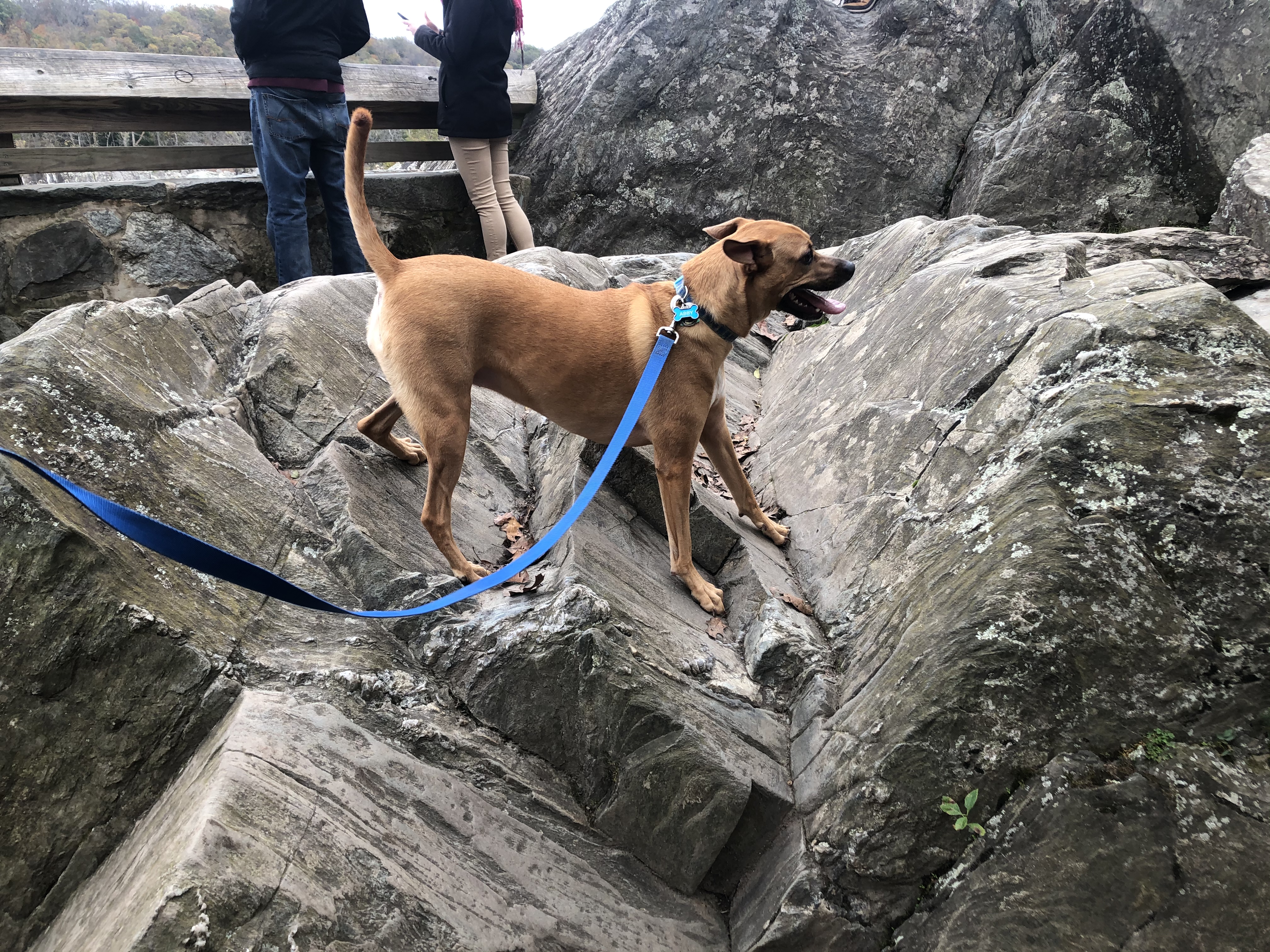